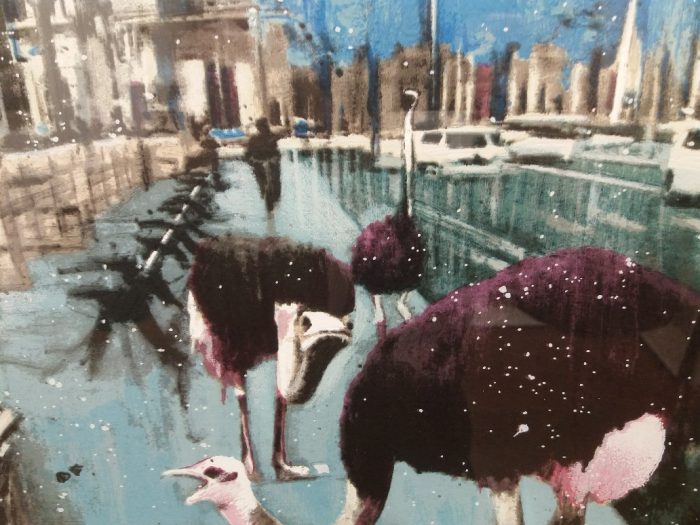 MISPLACED LIQUID FEARS. Angelo Accardi Serigraphy 50×70, Accardi litographs.
It can be defined as sensational “misplacement” in strong hues, that,
which Angelo Accardi presents us, after having resounded his own
unconscious and his very own sensibility upon the world. His act of
“misplacing” is immediate, something which is born of suffering and not
arbitrarily designed, permeated with the fear of the present. On canvas
he materializes the body of an impending menace: the threat of invasion,
of loss, of xenophobia; summed up in the ever hovering, but intangible
Final Clash, either as a clash between the cultures or as the implosion
of our very own civilization. The expression “misplaced” must be taken
literally, it is not intended as an idiom. It is exactly the presence of
a surreptitious element in a space where it doesn’t belong, that moves
Accardi’s reaction, being in the habit of responding with mental icons
to stimuli that move him. Airplanes on the city streets are uncalled for,
out of place, so are ostriches. Misplaced is also a giant Ark on a city
scene. Taking up these phenomena and giving them a countenance means
being able to grasp the right elements for comprehending the threat
that is looming over us. Will it be a terroristic attack, or the flood
of commodities? May it be the egoisms of the multinational corporations?
Accardi helps us to understand all this. The fear of losing something
anticipates the anguish felt at its verification. Today this anxiety is
spreading out, connoted by the concept of “liquid fear” which encroaches
almost equally and impartially on everyone. The sociologist Zygmunt
Bauman states in his recent essay “Liquid Fear”: “The most dreadful fear
is fear when it is diffused, wide spread, indistinct, in free circulation,
fluctuating, without having direction or a distinguishable source; such
fear, as pursues us relentlessly, without ever knowing where it comes
from, the ever present threat that inspires the fear that we perceive
anywhere and everywhere, but which never assumes clear contours. Accardi
is an attentive witness of his times, absorbing the fluctuation of this
ever present state of fear; he does however not only record it, he goes
beyond, severing it at its roots in an attempt to dispell it by giving it
a countenance with which to face up to it. “It seems night has suddenly
fallen on our open-minded and tolerant western societies. We must not
10
fear”, declares Angelo Accardi. And he adds: “The light inherent in Art,
which unites all peoples of the world, can guide us”. The works included
in the cycle “Misplaced” are not inspired by the marvel of surrealistic
representations of the past. His incongruous combinations do not propose a
state of reawakening from dreams. The buildings, airplanes, the ostriches
and metropolitan streets, are all images drawn from a dilated state of
consciousness, whereby the unconscious elaboration of latent fear gives
rise to unexpected combinations, however always subject to rational
control. The artist never relents to any dictates from within, when he
calls onto the scene oversized, inanimate bodies with blurred contours
that seem to liquify, pour out their contents into their environment,
thus heightening the sense of uncertain fear. The artist defines these
images as “co-realistic”. They are images whose realism is not derived
from the world outside; but are rather creations of the artist’s mind,
a new reality, a “co-reality”, filtered through the artist’s mind and
existing “a priori” to its being expressed in images. Accardi’s pictures
don’t emerge out of dreams, they aren’t products of horrible nightmares.
He created them by exploring his innermost self systematically. Accardi
foresees a possible reality before it becomes such, before it materializes.
He foretells of such eventualities. He anticipates forecasts and their
possible results, and makes us visualize them with the colour slides of
his mind; thus giving us access to his complementary reality, that which
comes into being prior to emotions. We, on the other hand, are overwhelmed
by emotions in front of Accardi’s works; Emotions which arise from the
solicitation of the beauty of things to come into being, from the figurative
eloquence of potential worlds of dread and danger, just dripping away.
But isn’t it our good fortune to have the chance of avoiding our going
adrift, as Accardi signals to his spectators, of overcoming the “liquid
fears” by living our present day life, without being overwhelmed by it.
Aldo Carrozza